Wow, has it really been two months since my last blog?

It’s not my fault. Seriously, the dog ate it…

Ok, so I don’t have a dog. Would you believe it was a shark? While we were at the beach. I fought to save it, I really did. I managed to tear my laptop out of its toothy jaws only for a cyclone to come and carry what was left of it away. Honest.

All right, would you believe that I’m just a very slack, very pregnant woman who has been far too lazy to put words to blog, which is a shame because there’s been so much to blog about… from holiday adventures in FNQ, to hospital adventures in RNS. And the delicious Devilboy has been on fire of late, his eccentricities escalating exponentially. But alas, my blog/brain co-ordination has short circuited.

And there really was a distraction in the form of shark, a beach and lots and lots of wind. I shit you not.

You see Devilboy’s sibling-to-be has most cheekily decided that it would be a hilarious jape to be due on Devilboy’s birthday. And given that DB has been determinedly planning (and by planning I mean nagging his mother daily) a shark infested birthday celebration for months – and that at the ripe old age of almost three, he is clueless to when his actual birthday is – we decided we would shark it up and celebrate early as opposed to attempting to host a kids party in the labour ward, which is something I think  most obstetricans frown upon. Party poopers.

So four weeks pre-three a party was planned and we chose the perfect weekend. Not only did we manage to select a weekend visited by one of the hottest days on record but one that backed it up with thunderstorms and a fairly fierce southerly change that lasted for the sum total of the duration of the party festivities.

And what better way could a 37 week pregnant woman with ankles swollen up bigger than Kanye West’s ego imagine spending her own 41st birthday than trying to prepare food for 30 adults and 15 children and to create and ice a fucking shark cake for an almost three year old demon in 41.5 degree heat – only for the weather to change and a southerly to create a sandstorm as soon as she pulls said cake out at the beach the following day?

Really does it get any better than that? Yes, I think it probably does. Shit loads.

But Devilboy really wanted his shark cake and his deranged hormonally-hyped mummy really wanted him to have it. There were tears, there was drama (all from me) but a cake was created… eventually.

And from my experience I can now share a happy homemakers tip with you all: Attempting to ice a cake with butter icing in 41.5 degree heat is like trying to ice a frigging sponge with olive oil. Try it, it’s a hoot.

This was the end result.* 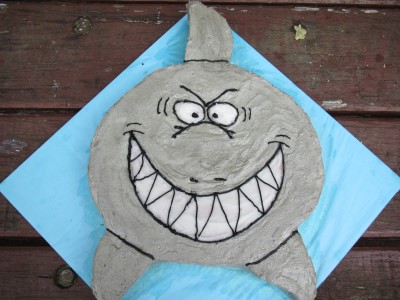 And thus, there was much rejoicing. And shark wrestlng. Yay, verily 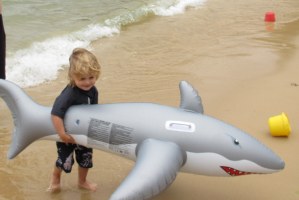 *Yes, it looks like I iced the fucker with concrete but I swear no children were harmed in the consumption of said fanged cakey confection.